Tallinn Moon Festival – the idea and execution, lots of pictures and tips 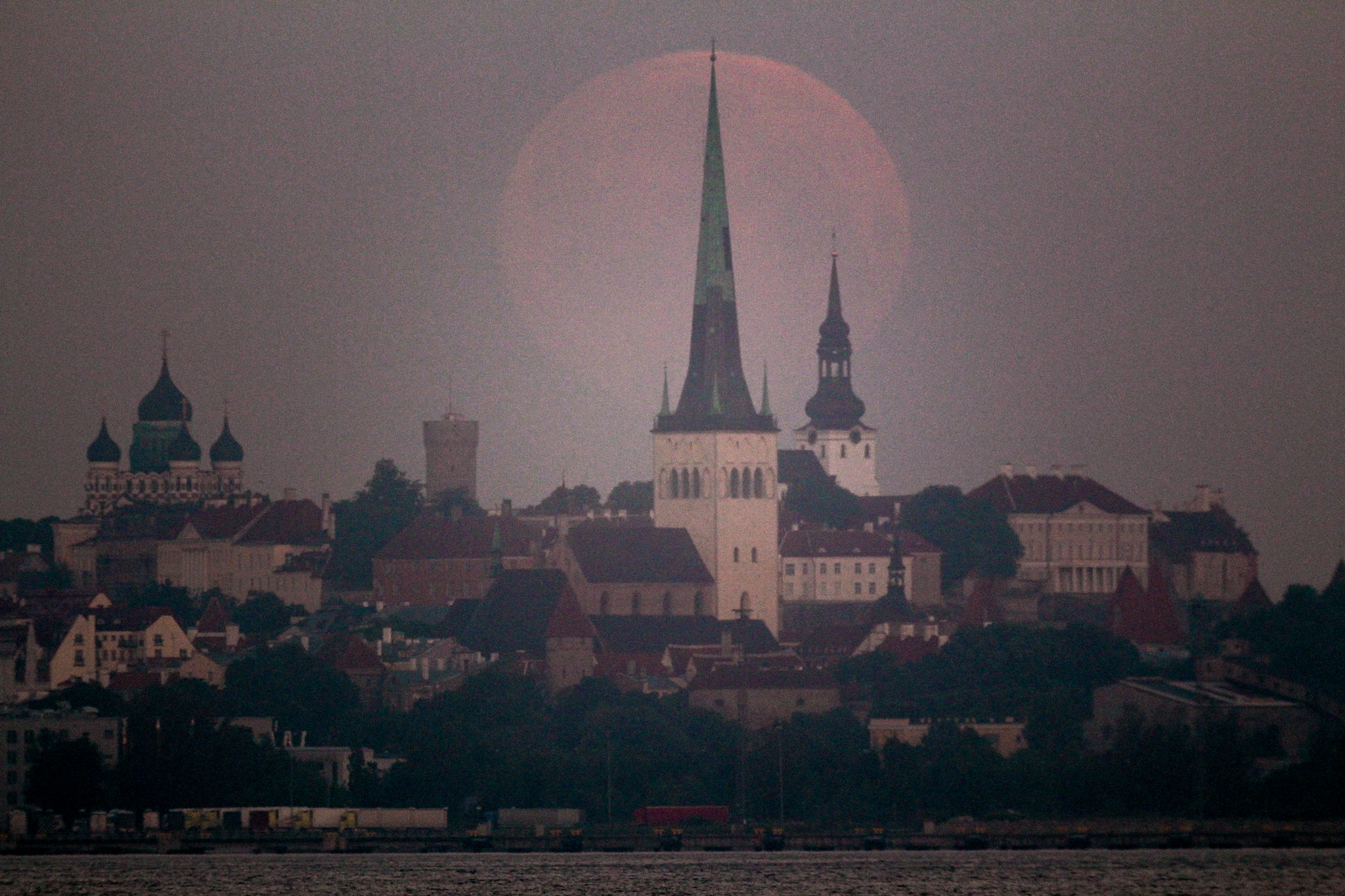 It started 23rd of June 2013. The media was full on Supermoon stories and I as a novice photography enthusiast wanted to try my luck with that. So I started actually in the evening of 22nd of June, because the Moon rose in Tallinn, the capital of Estonia, at 21.14 (azimuth angle 133 degrees) – one and a half hour before sunset (22.42).

(I include all this numerical information, because this type of data helps to plan the events and your whereabouts. Usually I get this information from TimeAndDate.com.)

It was quite a long night chasing the Moon around the city, capturing one Iridium flare with my new camera (Canon 700D) and wide angle lens (Tokina 11-16, F/2.8).

Half coincidence, half planning, because being at the beach with a telescope 4 o’clock in the morning is not usually a coincidence, I happened to drive myself to the beach at the other side on Tallinn bay where one of the most iconic view at the old town of Tallinn can be seen.

I had no particular expectations what to see, but soon it became evident to my then unexperienced eye that there is a possibility that the Moon will hit the towers and churches. So I set up my telescope (Meade 102 mm APO, f=700 mm, F/6,9), attached the camera and started to wait. I had to reposition myself several times, because the Moon seemed to hover too high over the Toompea hill.

The moonset was scheduled at 4.22 and azimuth 227 degrees, the sunrise was expected at 4.03 at the opposite direction. Distance between my location and the St. Olaf’s church is about 7 km (4,3 miles).

Sun was rising from behind and illuminating the town a bit, but unfortunately the front lens of my telescope was quite foggy by that time, because of long waiting and air moisture that was condensing. If I’d knew the exact time of the moonset, I would have kept my telescope in the car and took it out just before the real action.

Another lesson I learned was that ‘shoot raw!’, especially in hard and dark conditions. All the pictures taken are jpg and not much dynamic range left to adjust the foggy pictures. The best I could draw out from the pictures can be seen above. 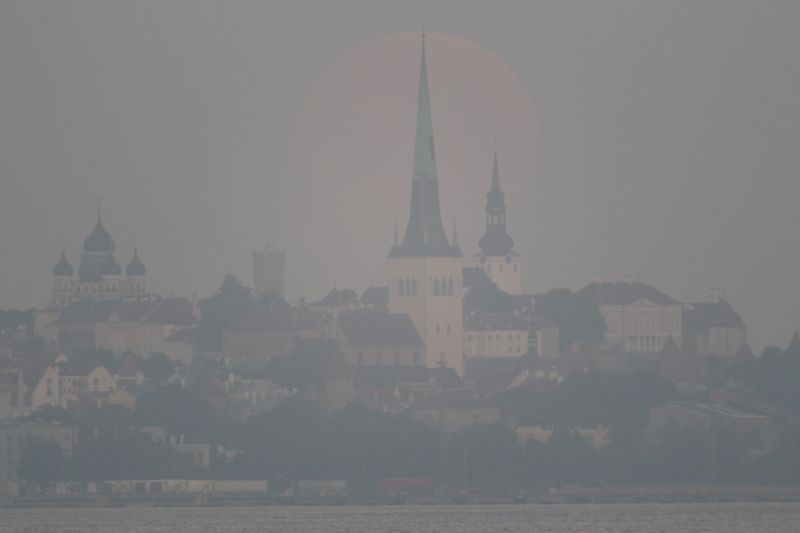 This experience provided me many valuable lessons, so next year I was better prepared.

I started to look for patterns – how the times and azimuths of the Moon change over a month and a year, what combination provides the best opportunity for Tallinn Moonset. The best recipe seems to be the full Moon setting nearest to the midsummer day. Sometimes this happens in June, sometimes in July, sometimes both months are worth trying. This combination provides the smallest azimuth angle so the view across the Tallinn bay is the best and the rising Sun illuminates the foreground just enough to capture the fine details and hues, but does not kill the contrast of the Moon.

See the map of the location: 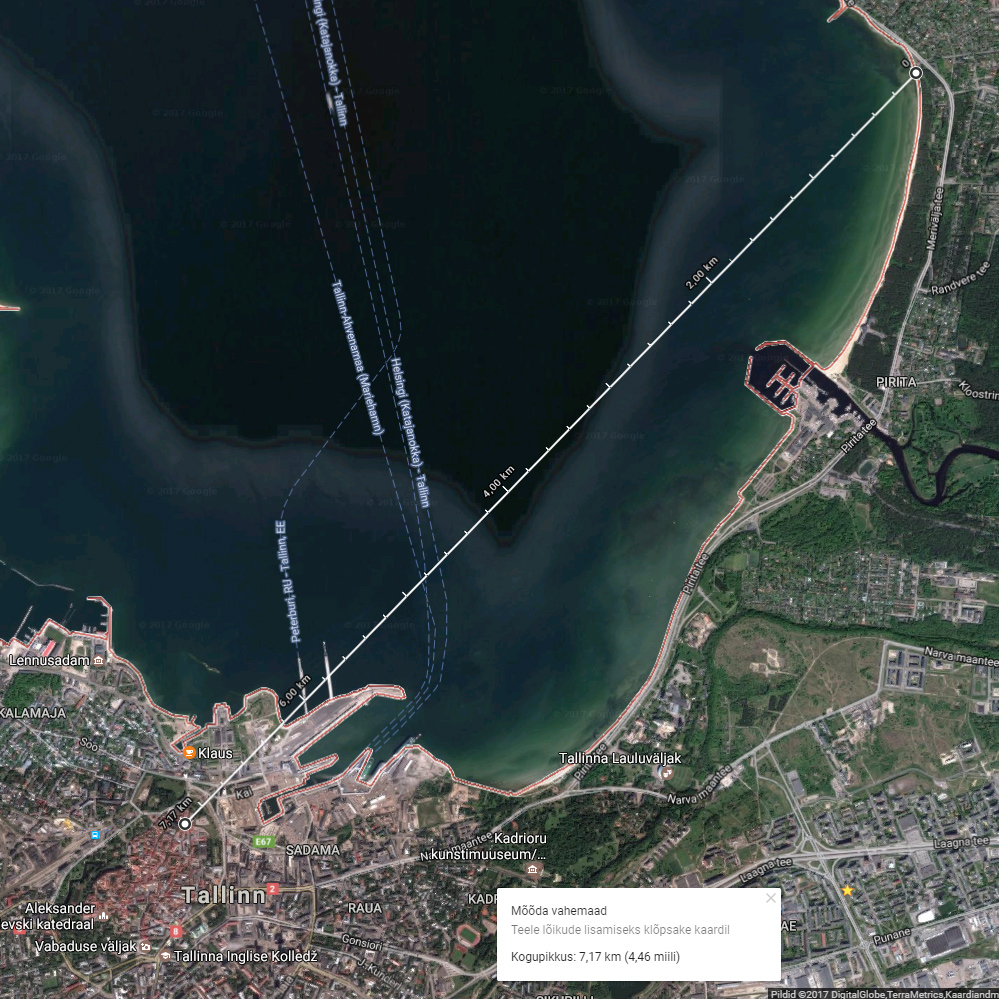 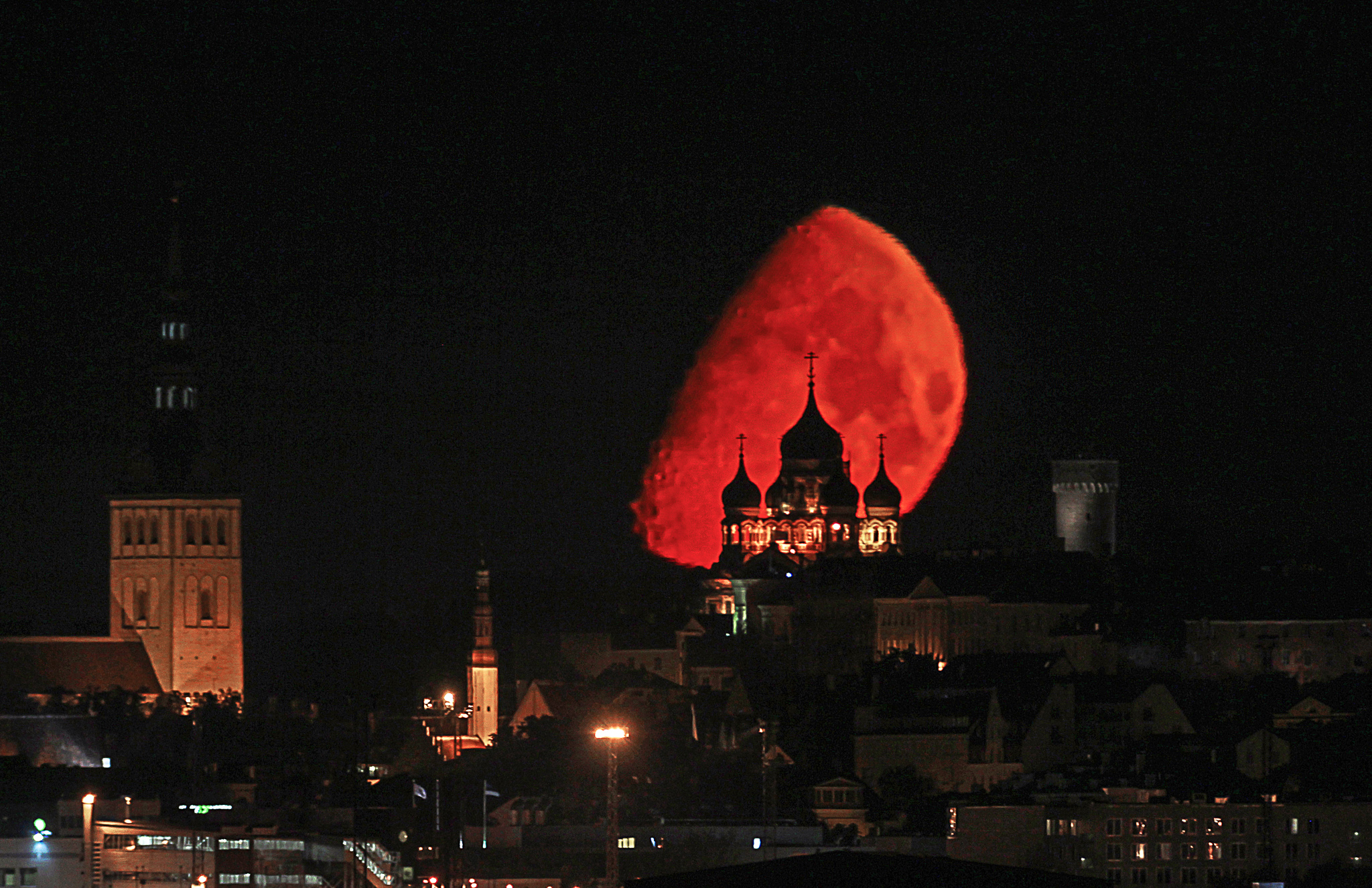 Again – captured in jpg format, wind was shaking the equipment, artificial light is not the best helper here. But this is how the experience is growing. 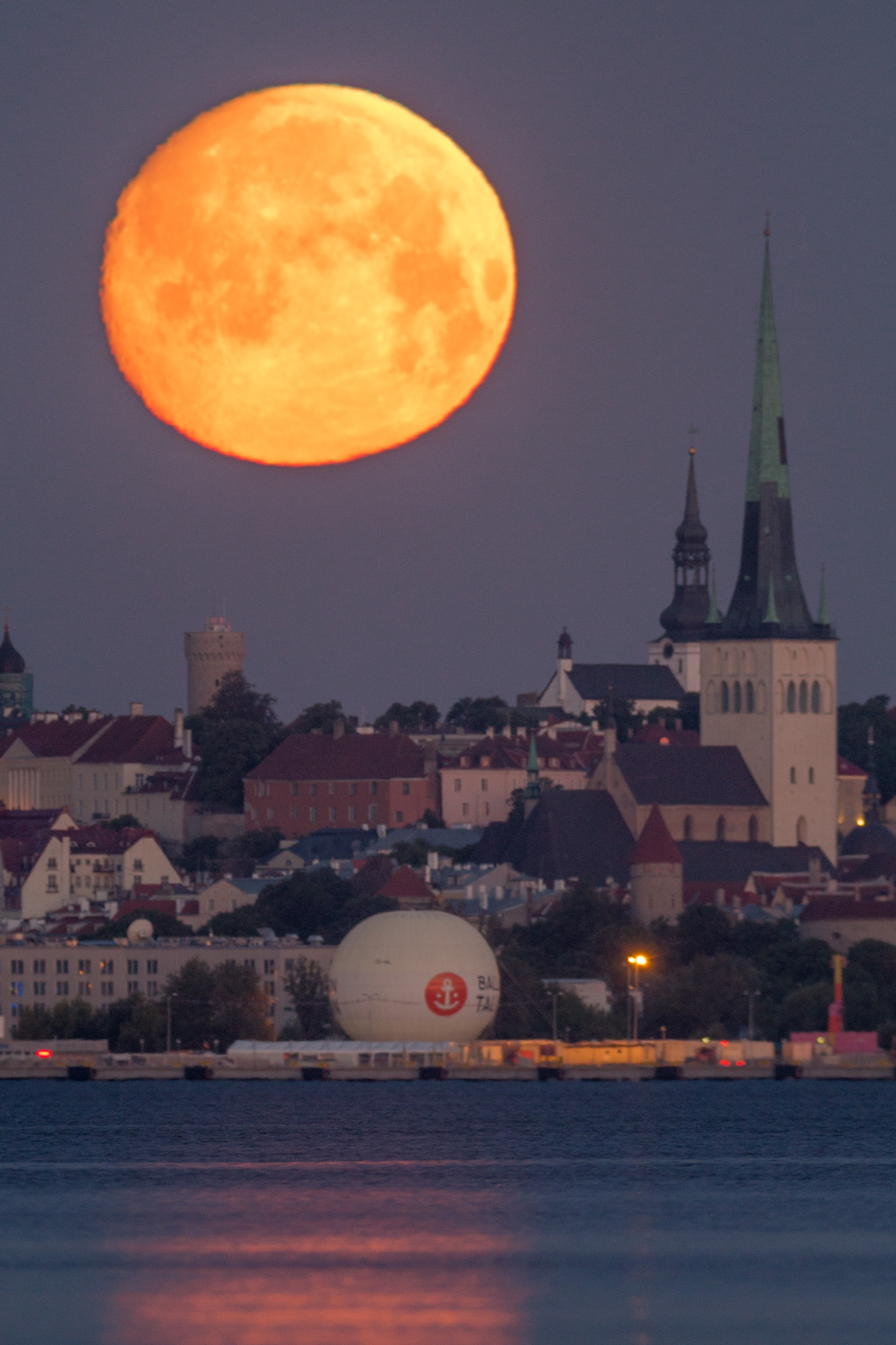 The reflection is important, because when I first published the main picture (see below) some people did not believe that this is not photoshopped from two different images, but one shot composition. Reflection on water is hard to fake, I believe.

The main image is this. 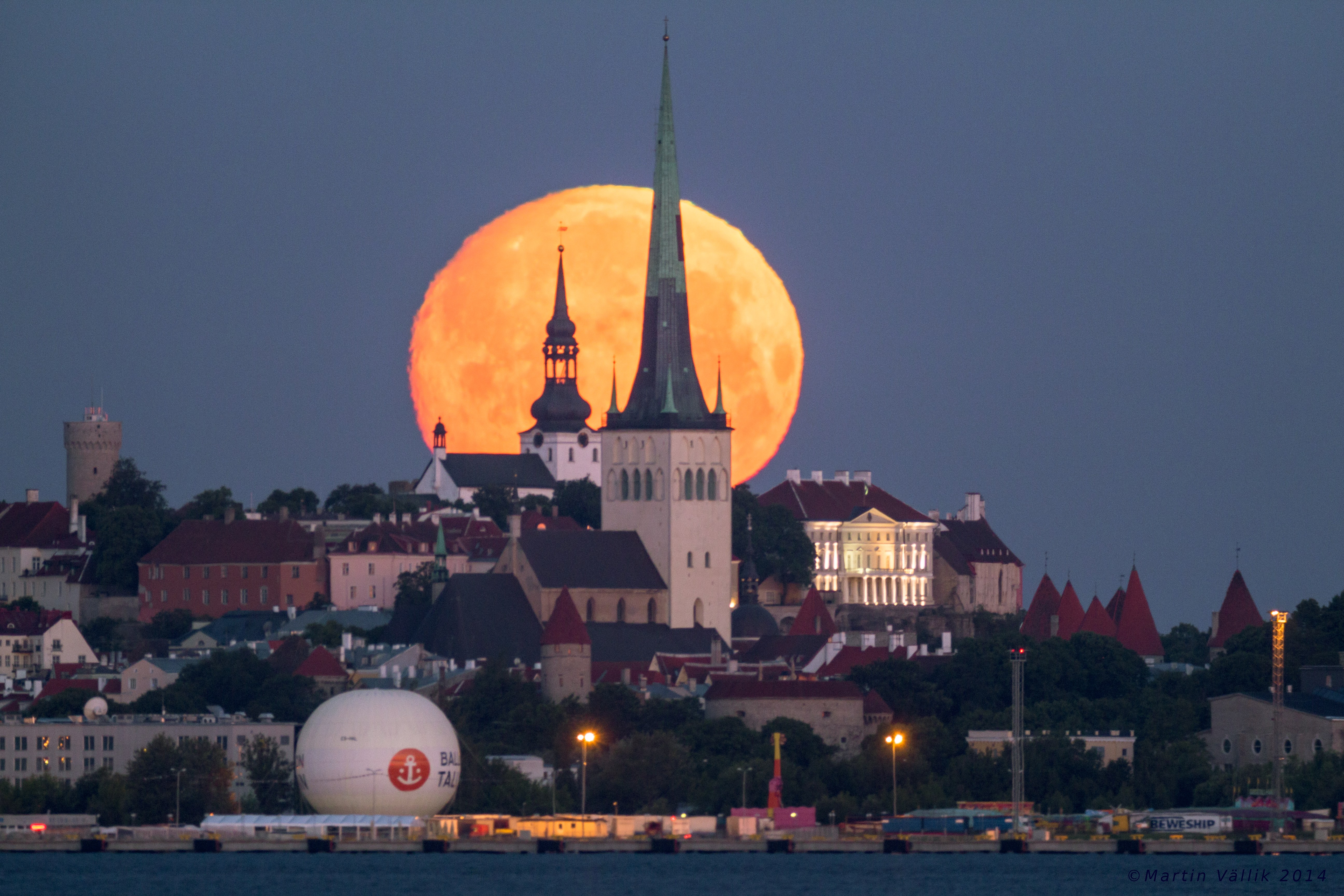 Seems that this separation between sunrise and moonset is optimal as we will see next year.

I have got My Picture of that scenery, I have shattered the minds of thousands of people, I have provided something only few have ever seen before. So now is the time to give it public and educate people how to do it on their own if you happen to have this kind of inclination. So the alignment of full Moon and Tallinn was made a public event. 3000 was interested and 360 people claimed that they will attend. In reality maybe 50 people were at the beach between 3 and 4 in the morning. 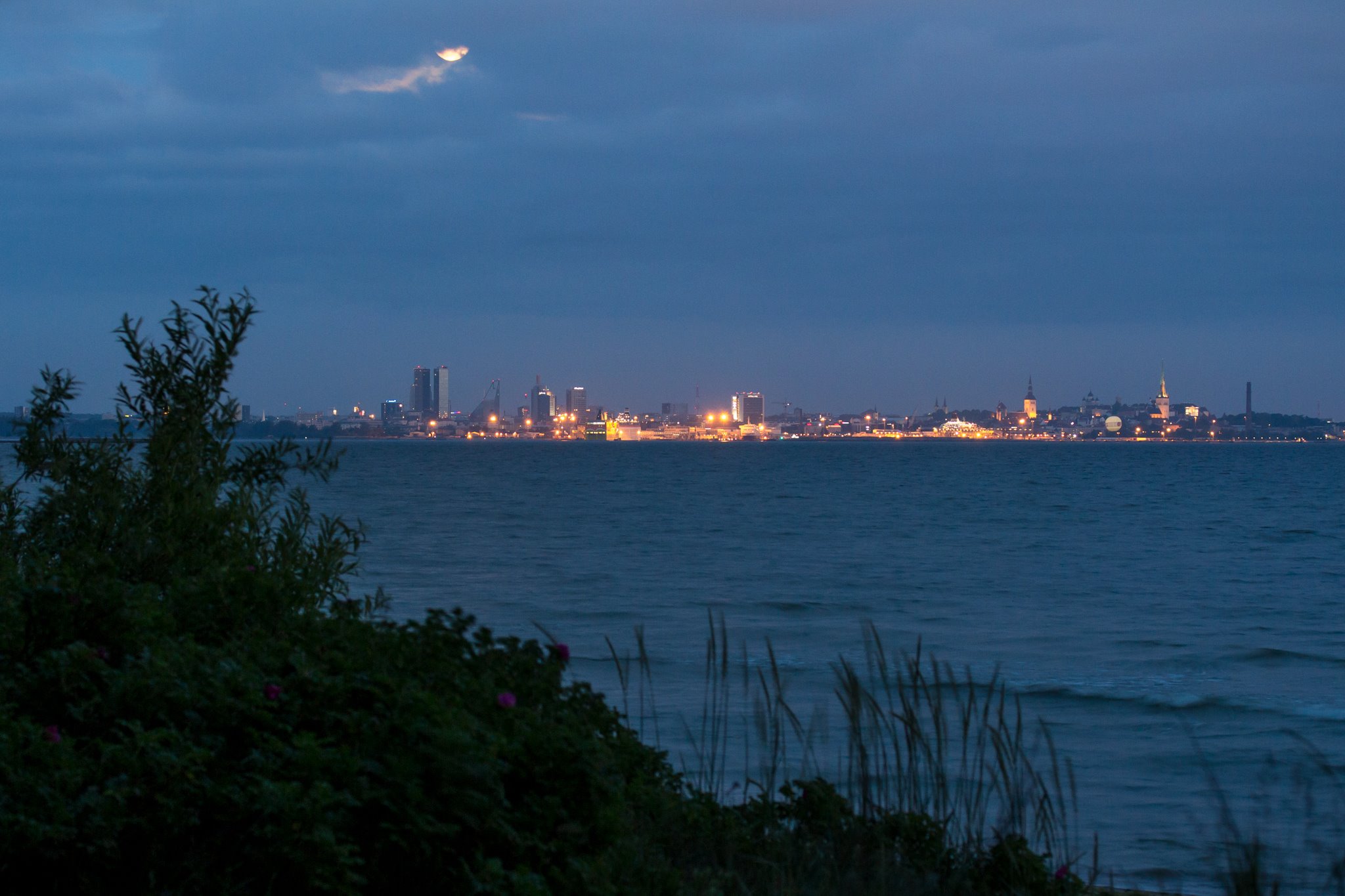 Some of us tried the next morning – moonset at 5.07 @232 degrees, sunrise 4.09, so the city was fully illuminated by the Sun, but the background sky was also bright and diminished the contrast of the Moon. 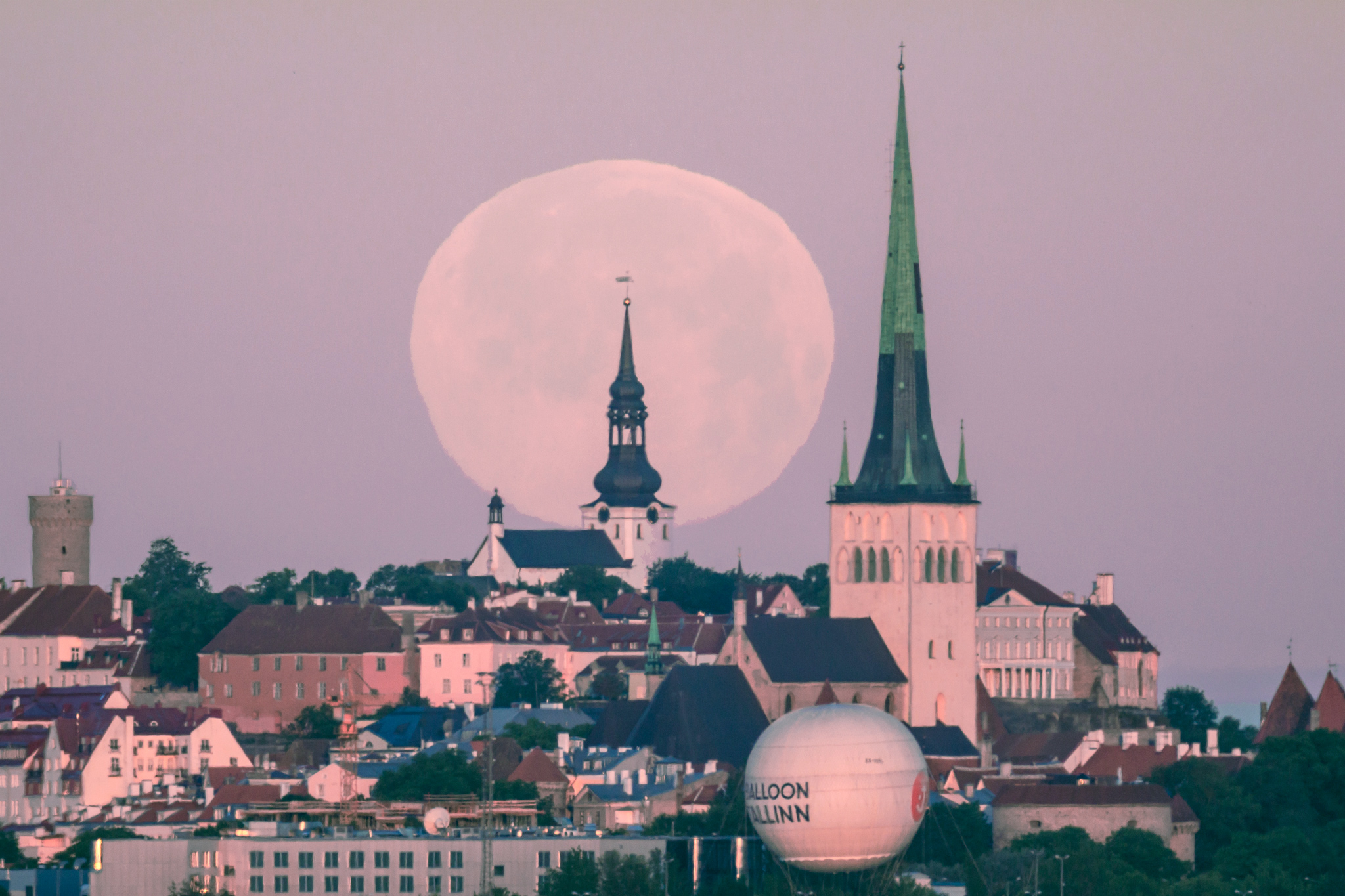 One picture from that set was published on Sky and Telescope web gallery. Our local media was also interested and many galleries provided many pictures, see Facebook event discussion page. 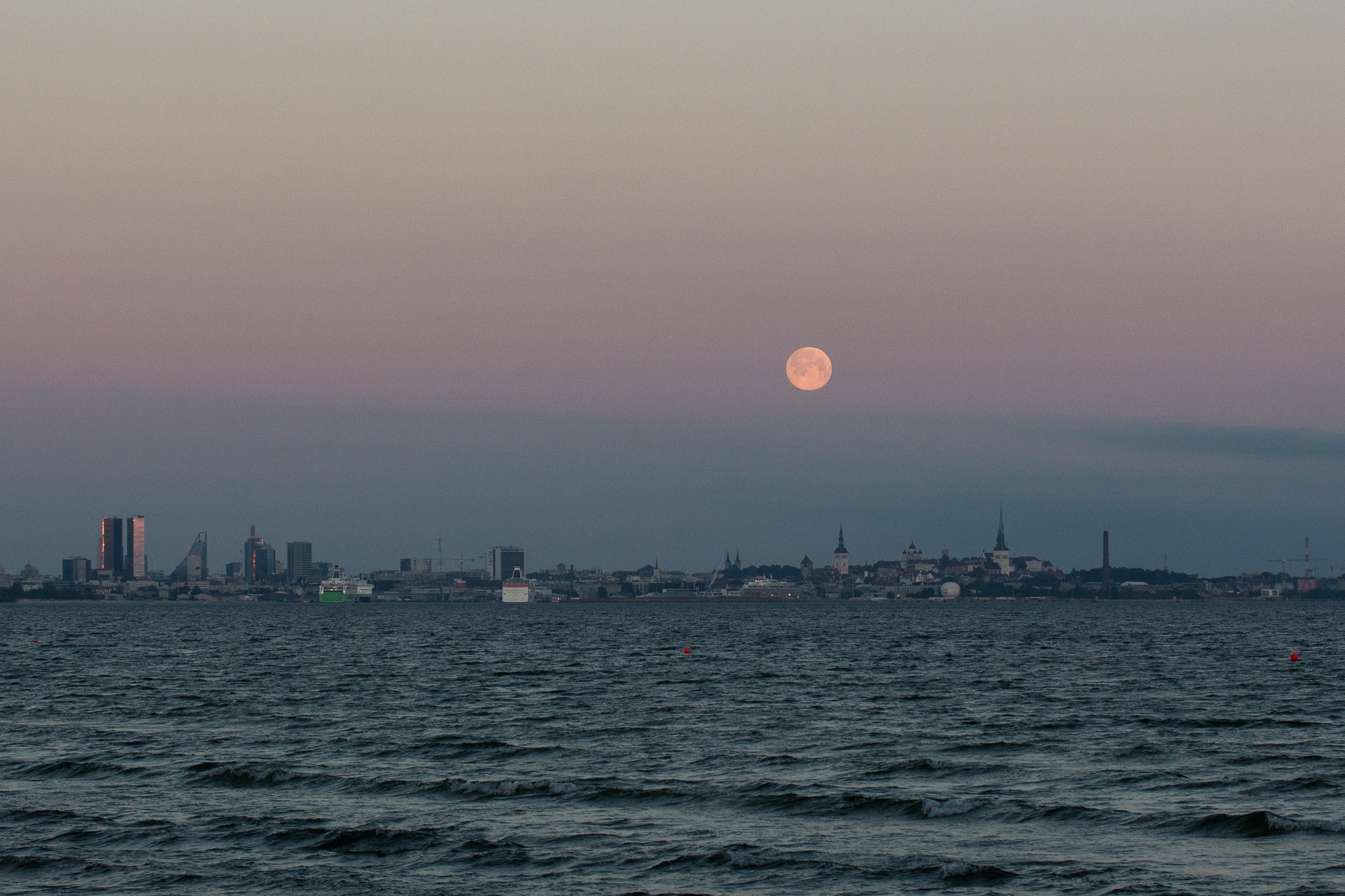 Pictures were taken and media observed the event, some links can be found here. 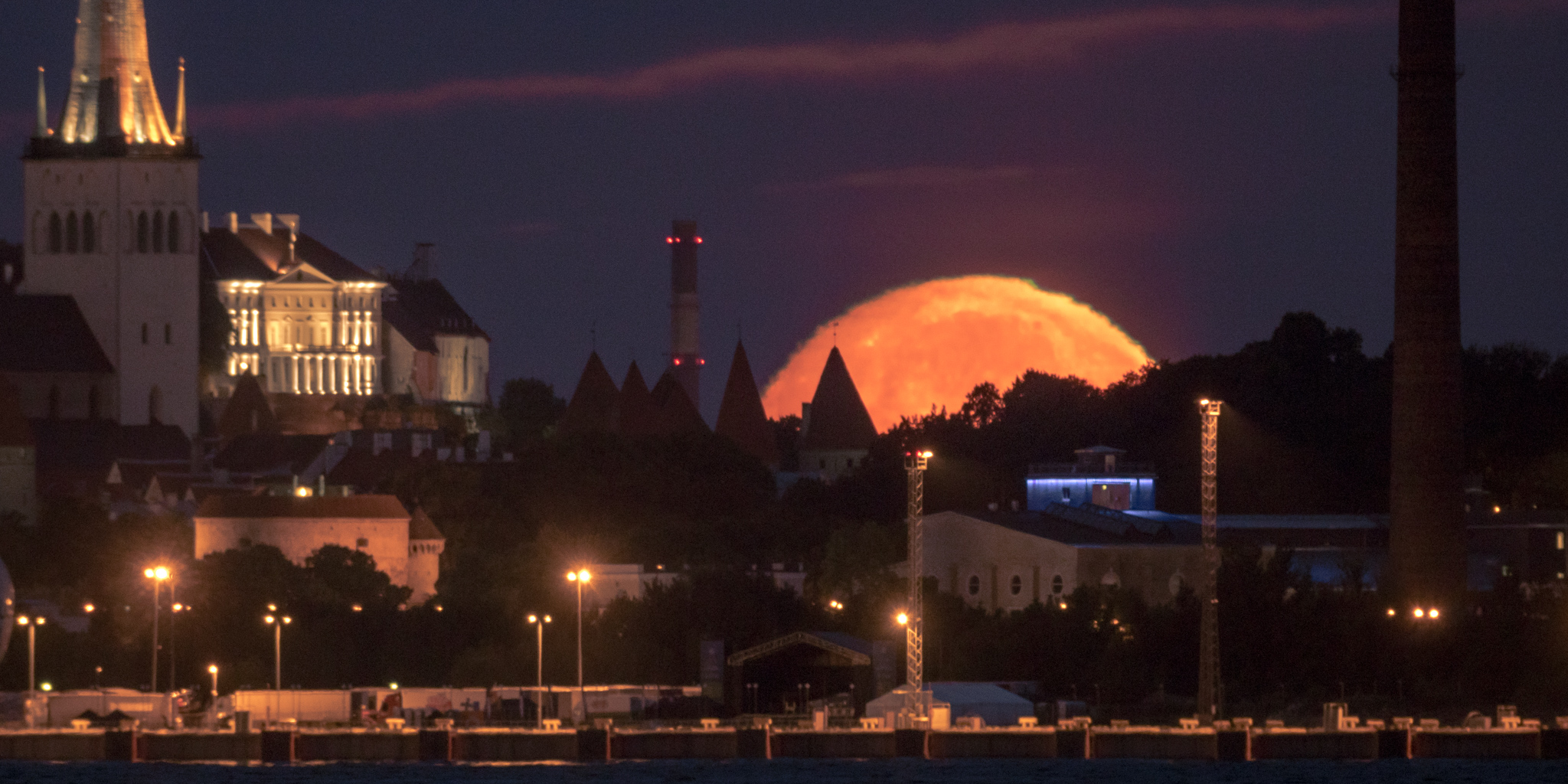 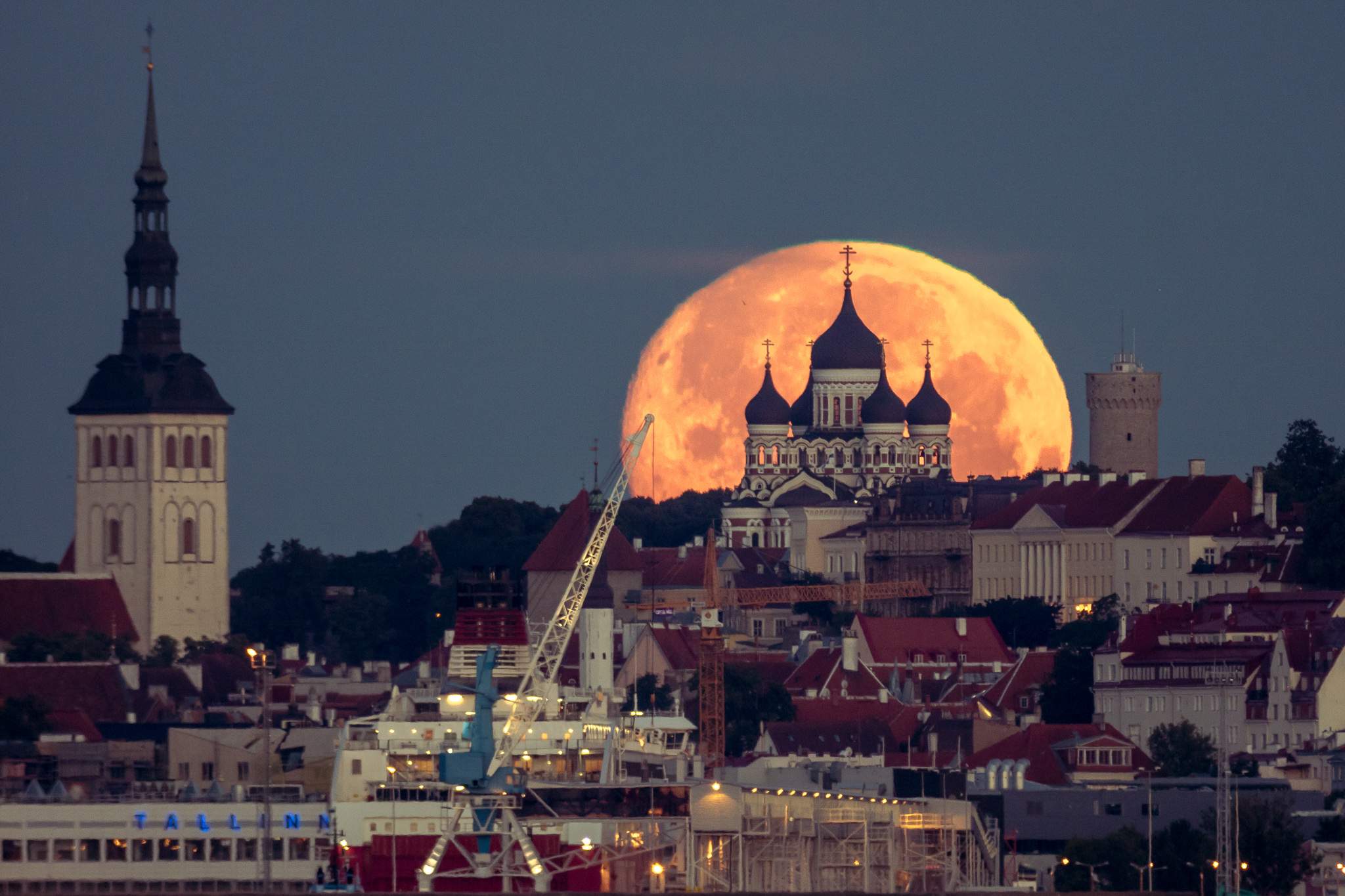 More of my pictures can be seen on Facebook, some are visible on 500pix.